skip to main | skip to sidebar

Breakup of the Larsen B Ice Shelf

This time-lapse video, taken from a NASA satellite in January, February, and March 2002, shows the disintegration of the Larsen B Ice Shelf on the eastern side of the Antarctic Peninsula, just across the peninsula from Palmer Station. The opening frame shows the shelf on January 31, 2002, with dark blue melt ponds – caused by high temperatures – clearly visible on the surface of the ice shelf. Water from the melt ponds trickled down into the ice shelf, weakening it and contributing to its collapse. In the middle frames, the ice shelf begins to retreat in advance of the catastrophic collapse of the shelf on March 6th, 7th, and 8th. The final frame shows that the ice shelf – once larger than Connecticut – has disintegrated into millions of pieces of blue slush. The Larsen B Ice Shelf, which scientists believe had existed along the eastern Antarctic Peninsula for at least 11,000 years, is one of eight ice shelves that has fully or partially collapsed on the Antarctic Peninsula in the past several decades because of rapidly rising temperatures. 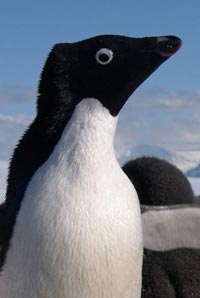